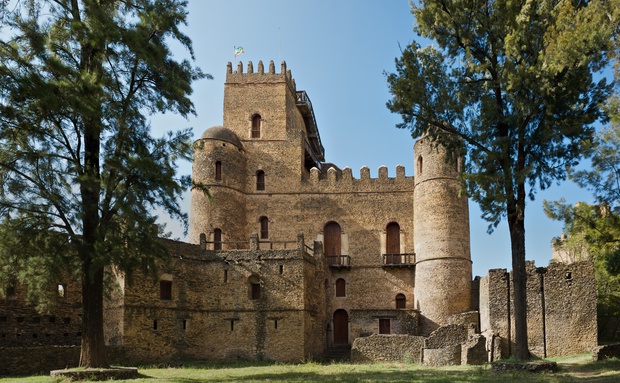 This adventure begins in the Northern Tier of the country, starting in Bahir Dar, the source of the Nile, continuing to the ancient city of Gondor, often described as the Camelot of African. From there our journey takes us to the Simien Mountains to enjoy the majestic scenery and hike among the gelada baboon and other wildlife of this World Heritage Site. We descend onto Axum and its archeological treasures, the beginning of several days of discovery in Tigray’s Open Air Museum. Finally we arrive in Lalibela, and its famous rock churches – the fourth Unesco World Heritage Site of this expedition.

We explore the interplay of religion and civilization, the role of architecture and how kings used it to legitimize their reigns, and the cultural influences of those eras and how they continue to today.   At each step in our journey, we see the everyday life of the country, its music and dance, we taste its cuisine, and we walk in the steps of pilgrims and view its natural wonders. It’s a journey of cultural immersion.

Land at Bole International Airport, our Staff will meet you at the checkout point to transfer to hotel and Check in to chosen Hotel. If you have time on this day you will have a city tour of the Metropolis which includes.- Ethnological Museum:-It is found in the main campus of the Addis Ababa University by the Institute of Ethiopian Studies with the aim to preserve the country's historical and cultural heritages. It has complete collections that describe almost all the tribal groups in Ethiopia. Here you will have an overview about the history, culture and traditions of the people of Ethiopia. The collections include the nomadic tribal groups that are now living just as man's forefather lived thousands of years back.

Merkato: It is the largest open-air market in Africa. Here you will be

Presented with confusing, but fascinating, glimpse of the vast range of goods and artifacts available from all parts of the country and you will enjoy the Ethiopian trade exchange tradition in the open air, you can purchase anything you desire here.

Early in the morning, we depart north to Bahir Dar via Debre Markos. On the way visit the Debre Libanos monastery that lies 104 km north of Addis Ababa which is considered as one of most holy sites in Ethiopia. The monastery was found in the 13th century by a priest credited not only with the spread of Christianity throughout the highlands, but also with restoration of Solomonic line of kings. En route we will also visit the Portuguese bridge, which was the first bridge built in Ethiopia. Continuing to Bahir Dar passing through the spectacular Blue Nile Gorge.

This day explore Bahir Dar rests on the shores of Lake Tana and is one of Ethiopia's prettiest cities with wide avenues, palms and jacarandas and stunning lake views. For centuries BahirDar has been a trading center for the region and the tankwa (traditional papyrus boats) can still be seen transporting goods across the lake. After check in, we head out on Lake Tana to the Zege Peninsula and its famous monasteries. While on board our private boat, keep an eye out for a variety of bird species and the traditional tankwa crossing the lake. After a short hike through local villages and coffee farms, we reach the monastery of UraKidaneMeret, is home to an important collections of crosses and crowns dating back to the 16th century.

The painted maqdas, colorful and well-preserved, tell stories of the Ethiopian saints. The second monastery we visit, Azwa Maryam, is a small and pleasant site with gardens and a humorous young priest.

In the afternoon, make excursion to the Blue Nile Falls. The Blue Nile Falls is considered by many as one of the most spectacular falls in Africa. When in full flood the falls are quite impressive at 400 m wide and 45 m high. The falls are an interesting site with some nice bird watching on the easy 30-min walk to the viewpoint. Hippos and crocodiles are occasionally spotted on the banks of the river, especially in the early morning and late afternoon hours.

After breakfast we depart for the three hour drive to Gondar. We pass rural

Villages, Cross Mountain passes with stunning vistas and get our first glimpse of the impressive castles of Gondar. Often called Africa's Camelot, Gondar isn't far off the mark. With the castles of the Royal Enclosure, ornate churches and resplendent bathing pools, it's easy to imagine Gondar in all of its glory as the capital of Ethiopia in the mid-1600s. King Fasiledes named Gondar capital in 1636and by his death in 1667, Gondar's population had reached 65,000 and its wealth and beauty was well known throughout the land. Spend the day exploring the Royal Enclosure and its buildings, the nearby bath of King Fasiledes (where modern-day Timkat ceremonies are performed) and the Debre Birhan Silasse Church with its 80Ethiopian cherubs.

After breakfast we drive to Axum crossing the Tekeze river gorge and appreciating the breathtaking scenery. Axum is a city of great historical importance; once the ancient capital of Ethiopia. According to legend, Axum was home not only to the Queen of Sheba who purportedly married Kind Solomon of Judea, but since then has been the resting place of the lost Ark of the Covenant. As we explore the town’s ancient relics and delve into its phenomenal history, the mystery deepens, and one suspect’s clues to the true origins of Christianity truly do reside in Axum.

Today we explore the St. Mary of Zion Complex an unexpected blend of ancient and modern. The original church was built in 1665 by Emperor Fasiladas, the founder of Gonder. It is thought this church is built on the original foundations of a temple built by King Ezana or King Kaleb in the 4th or 6th centuries, making this the oldest Christian site in Africa. The guarded chapel is located in this complex, said to be the home of the Ark of the Covenant. The modern St. Marys of Zion Cathedral dates from the 1960s when Emperor Haile Selassie had it build. The architectural style is painfully out of place in the ancient city, but the contrast between the buildings on the site is an insightful glimpse of a country with a history that is a living thing. We spend time exploring the on-site Museum under the Church, which houses many of Ethiopia’s priceless relics (the museum was recently opened to both women and men, photography is not allowed).

Here you will have the chance to visit a family house where you will observe their daily life activities and have a coffee ceremony with the family. Ethiopian coffee ceremony is one of the most enjoyable events you can attend at an Ethiopian Restaurant. The coffee is taken through its full life cycle of preparation in front of you in a ceremonial manner. Coffee is called 'Bunna' (boo-na) by the Ethiopians.

In the afternoon, visit the ruined Queen of Sheba Palace and the 10th century BC Axumite Temples of Kings Kaleb and GebreMeskel overlooking the Adwa Mountains and Eritrea. Keep watch for the Christian crosses carved into the walls of the tombs. We also visit the Archeological Museum, Stelae Park and Ezanas Inscriptions. The North Stelae Park contains over 120 stelae, some are upright, some are buried and others have been removed. The Rome Stelae, the tallest at 25m, was shipped to Italy in 1937 under orders from Mussolini, but has since been returned and has very recently been re-erected.

After breakfast, drive through the dramatic highland landscape to mekele en route visit Yeha, passing unique sandstone homesteads along the way. This city was founded at least 2,800 years ago and served as the capital of a pre-Axumite empire. The well-preserved stone temple was built 2,500 years ago. It also served as a center of a monastic Christian community in the early 6th century. A modern church built next to the temple ruins contains some of the ancient temple stones and its treasury contains illuminated manuscripts and crowns. Continue driving with the Wukro Cherkos church. The church is regarded by locals to date from the 4th century A.D. In many aspects, the edifice shows a considerable resemblance with Abraha Atsebaha. The main room containing a beautifully decorated 15th century pillars with painting depicting angles and saints’ line drawings cover the ceiling.

This morning after breakfast we drive 280 km through the wonderful scenic beauty of the highland region to Lalibela- known as Kingdom of the rock where rock hewn churches built in 12th century are found. En route we will visit Yemrehane Kristos. Lying 42 kms away from Lalibela town, Yemrehane Kristos is undoubtedly the finest church outside of town. Unusually, the church is built rather than excavated within a cave. The whole church rests on a foundation of carefully laid olivewood panels, which float it perfectly above the marshy ground below. Behind the church are the bones of countless pilgrims who chose to be buried there. There is also a tomb that includes the remains of Yemrehane Kristos.

Lalibela is a striking town set at over 2500 meters in wild, craggy mountains with two-story stone houses that are quite different to thosein the rest of Ethiopia. We are here to visit the huge 12th and 13thcentury rock churches carved below ground level and connected by a maze of subterranean passages. Each of the churches is unique and intricately carved, and is in continuous use.

Full day sightseeing tour of Lalibela: Lalibela, famous for its rock hewn churches dating back 800 years. There are no less than 1000 churches in the Lasta Region of Lalibela, some hidden in enormous caves, but exceptional to find 11 churches of such master craftsmanship in one locale. These brilliant feats of engineering and architecture are often referred to as the Eighth wonder of the world. The afternoon is also spent exploring the atmospheric subterranean complex of passages and the 11remarkable rock-hewn churches.

Morning, visit the first group of the churches which represent the earthly

In the afternoon, visit the Second group of the churches representing the heavenly Jerusalem. In this group are the Bete Gabriel & Raphael, Bete Merquorios, Bete Emmanuel, and Bete Abba Libanos. Late afternoon explore the most elegant of Lalibela’s churches, Bet Giyorgis, located in an isolated part of the village on a sloping rock terrace. This is said to be one of the most finely executed and best preserved churches.

This morning enjoy an excursion out of town to Asheten Mariam a top mountain overlooking Lalibela, by mule back. The mountain views are impressive and panoramic and it's easy to understand why the priests at this church believe they are the "closest to God."

After lunch we start drive to kombolcha with stops on the way.

This day after breakfast drive to kombolcha on the way visit the Hayk Lake, the local monastery Estafanos and enjoy the scenic surrounding area Geleada Monkeys in one of the spectacular view in the town of Debresina. After arrival in Addis you will time for shopping and some sightseeing in the capital.